On the monitor screen a couple cling together on the dance floor, fingers slide softly up and down backs, bodies pressed up against each other. I am thrown back to the 1970s and the Marconi Club in Lavernock – hanging off a lanky youth in black velvet jacket and flares to whatever’s playing: Chicago’s If you leave me now, 10cc’s I’m not in love (I couldn’t be too fussy, The Clash didn’t do smoochie numbers). The slow dance, the kiss, the wait for the phone call, the trip to the cinema, the hand casually snaking across the back of the seat. This is a scenario that most will recognise. The end of the night, droopy eye-lidded and lost in the moment.

All of this before I put on the headphones in the gallery to hear Diana Ross’ When You Tell Me That You Love Me (hit the link if you’re feeling sentimental). I am just considering the intimacy that the slow dance engenders and what might grow from that proximity, when a figure interrupts the dancers, cutting in and taking over, and the intimacy is transferred. Something that will be endlessly repeated over the course of 24 hours in Cypriot artist Christodoulos Panayiotou‘s Slow Dance Marathon (2005)

I’m visiting the Glynn Vivian Art Gallery, in Swansea, for the preview of two shows: Parasol Unit‘s I Know Something About Love Part II and an outing for Laura Ford‘s 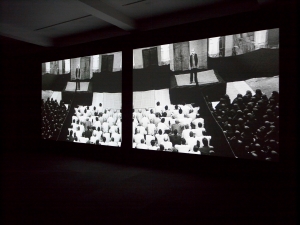 Beast & Other Works. The former suggests fluffy kittens and flowery meadows, but it’s a more in-depth look at love from different cultural perspectives. When I take the headphones off again, I’m still looking at the dancers as I become aware of a passionate Arabic oration from the next part of the gallery. The contrast couldn’t be more stark. In one room casual intimacy, in the next sit rows of men and women, gender-separated by a black curtain, with two characters -a  man and a woman – slowly becoming the focus of a developing visual narrative. The work, Fervor (2000) speaks of the destructive effect of the post-revolution regime in Iran that restricts human relationships and places a wedge between men and women. Which, of course, could be said in an essay or tract, but not as eloquently or poignantly as this two-channel, black and white filmic poem by Shirin Neshat. The work is eleven years old, but the situation in Iran hasn’t changed.

Another shift, another apparent contrast, in the final work of the show named after The Exciters’ lyric from Tell Him, occurs in the final tri-channel film by Yang Fudong, Flutter, Flutter… Jasmine, Jasmine (2002). Here a Shanghai couple talk about falling in love and being in love, sing, dance and canoodle. It’s sweet, occasionally funny and visually engaging.

But Yang is not an artist concerned with sweetness and light or the flowers of romance. A closer look at the scenery and the context  – glossy skyscrapers and run-down alleyways – China’s jump from a culture of repression and suppression to one of embracing Western mores and materialism is not one that Yang wholly approves of. And the volte face of the current regime doesn’t seem to be entirely driven by a desire to liberate and liberalise the Chinese people. The Westernisation seems to be a glossy façade, like the skyscrapers, covering something that is still held together with sticky tape and blood-stained string.

Fresh from my explorations of love I trotted down to the Atrium space to say “hello” to Laura Ford’s Beast, an old friend from the Welsh offering at the Venice Biennale in 2005. The Glynn Vivian acquired this work for their collection after Somewhere Else (the Wales in Venice show) had toured Wales and have given it a regular airing since. This is hardly surprising as its bathetic presence, speaking obliquely of the atrocities at Guantanamo Bay, of degradation, humiliation and disorientation,makes an immediate connection with audiences.

This time it’s accompanied by equally strong works – Mummers (2011) and Espalier Girl (2007). While Ford’s work is made from materials that make them immediately familiar and the human forms create a strong sense of empathy, there is a dark thread throughout her work that slowly reveals itself. The child-like figures, covered in shaggy felt costumes in Mummers, speak of play at first and the title references ancient rustic theatrical tradition, despite the obvious character lying on the ground. But then you notice that one of them is holding something that looks like a crow bar and the mood darkens. It’s not hard to draw a connecting line between this childish scene and the increasing incidence of child knifings and shootings by other children. 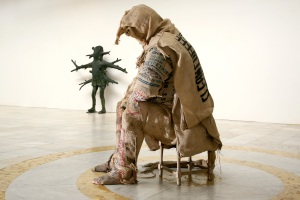 By the same token Espalier Girl draws the eye in to what seems to be a comic costume – girl as tree – but of course espaliering is a gardening technique to force plants to grow to the gardeners will.

These are dark themes for a public gallery but, just before the show officially opened I met the team who had been working with local schools in Swansea, who were rhapsodising about the response of children to these sculptures.

Perhaps the response is not so surprising. Ford recently showed a new work, Little Bird (2011) in the Locws International Festival earlier this year, which provoked strong reactions – some people wanted to protect the forlorn figure in fancy dress, while others tried to destroy it. You can read my review of Locws for a-n here.

So I left the Glynn Vivian, once again, knowing something more than I had when I’d entered it and with The Exciters tune thrumming in my mind.

I know Something About Love Part II and Laura Ford: Beast & Other Works runs Tuesdays to Sundays until 04 September 2011

And while you’re there… don’t miss two shows in artist run spaces:

Thomas Goddard: 1961 – 1999 at Supersaurus. Goddard takes up residence with the friendly collective until 15 July 2011

and last, but by no means least, Second Star to the right and Straight on Until Morning at The Mission Gallery  for Ben Rowe’s take on escapism