The Welsh arts community is currently reeling at the news that artist, photographer curator, co-founder of tactileBOSCH and all round mover and shaker, Kim Fielding, died suddenly last week, following a suspected heart attack.

Describing Kim in words, particularly when this blow seems so close to home, is difficult. He had a go himself  here  on his Culture Colony profile, but as anyone who has struggled with a personal statement knows, getting a sense of a person through words alone is like describing air without breathing it.

So Kim was all of the things in my introduction, and everything that he writes about in his profile, but then he also a the larger than life figure, screeching up late to a meeting on his bike, or throwing dinner parties for no good reason, except for the pleasure of putting people together in a room over eccentric but delicious feasts. He saw a hole where something might happen, usually for the benefit of many other artists, stepped in and occupied it with a seat-of-the-pants, skin-of-the-teeth derring-do.

The enterprise that was tactileBOSCH  was just a tiny part of his mission to make things happen. He turned his basement in Cardiff’s Riverside into an installation space for Cement Garden; collaborated with Jan Bennett to put a terrifying creature in the basement of an empty building in Llandaff Rd (part of the House project); infiltrated numerous other venues around the city  – most recently the Wells Hotel, Nos Da bar, a couple of  buildings at the back of Milgis in Roath, the Wales Millennium Centre and even Urban Outfitters – ventured forth to Berlin, New York and South America (to name just a few of his international adventures), but always came back home to make another pot of hair-liftingly strong coffee for all of us who passed through his flat.

And those coffee drinkers kept getting more numerous by the day as he scooped up new emerging talent as it popped out of Cardiff Art School (and often before the talent had fledged he offered a proving ground for ideas), groomed new curators for their first shows,  ran the most exhilarating photography courses (Room 101) or simply just got out and about and met people, scooped them up and made many of them his willing slaves (I can still retrieve the memory of the smell left in my car after somehow agreeing to transport industrial quantities of rubbish from tactileBOSCH). 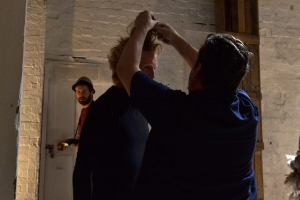 Kim had a can-do attitude and artists tentatively suggesting a new idea to him would always get the reply, “hmm, yes I think we can do something with that”, followed by action and realisation.

And the Kim Fielding laugh was something else – descending into a kind of honking snort that was utterly infectious – and frequently heard. If something really tickled him he’d cry out “barking!” at the top of his voice. Irresistible, irrepressible and occasionally exasperating because he was juggling so very many projects and ideas at once. If I was due to meet Kim at a given time I’d generally block off a few hours afterwards to allow for the shifting sands of his day.

We first met when I was working for the Arts Council of Wales. That initial meeting probably based on a budget crisis as the sums didn’t always add up and there was often a danger of a grant for tactileBOSCH’s programme being reclaimed. The applications themselves were works of art in themselves – hundreds of different fonts, in different colours and peppered with exclamation marks – as eccentric and colourful as the man who put them together.

It was a while before Kim thought to apply for funding on his own behalf and finally got himself some time to focus on himself with funding from the Arts Council of Wales. He spent the time developing new strands of his work, which he describes like this:

“Although a photographer by trade my personal artwork is based in video / installation / written word / sound & vision. Invariably lens based – it usually revolves around the story or essence of the protagonist I might be working with [or against]. Often a response in hindsight to the entanglements of personal relationships and the power therein, ‘an innovative combination of photo-visual and the human condition’ quote and un-quote.”

However this doesn’t even begin to describe the imagery that he created, which was often confrontational or provocative and occasionally disturbing. He’d find models for his photographs and films in the most unlikely places, drag them off the streets and, before they knew it, have them bound or gagged or covered in some sticky and hard-to-remove substance (sometimes all at the same time) or put them in an immersion tank or nail them into a crate. I should add that they were always willing victims of the Fielding charm and often came back to go through the whole experience again.

Alongside his activities to support other artists and the work that he made himself, Kim was also an inveterate documenter of arts activity and it will be the life’s work of many of his friends to collect, collate, archive, curate and edit all of the photographs, videos and ephemera associated with Kim’s all too short time with us. There is so much to say about Kim Fielding, but it’ll take a long time yet before the full mosaic of this rich and wonderful life is pulled together, piece by colourful piece. In the meantime there is a giant void as we all come to terms with sadness of someone who did so much and meant so much to so many. 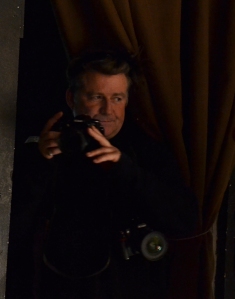 You can hear Kim talking about how he set up tactileBOSCH with Simon Mitchell in my inept interview with him in 2009 (click on the image below to hear it). 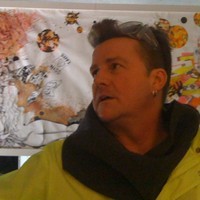 Or watch him talk about tB here courtesy of Culture Colony, or sample the essence of tactileBOSCH in this video of the Addiction show. [Please note that there are some images that might offend or disturb some readers in the last link and those that follow]. And if you want to see him with his work – here he is at the opening of his show Sidewinder at Oriel Canfas in 2009.

The funeral will be held at 2.45pm on Friday 21 February at the Wenallt Chapel, Thornhill Crematorium, Thornhill road, Cardiff, CF14 9UA. at 2.45pm Map here.

With thanks to Pete Telfer and Culture Colony for all of the links to video content in http://www.culturecolony.com

The award was launched on 24 October at the tactileBOSCH exhibition Paradise Lost, which, in true Kim Fielding form, included works by some 90 artists in the old Customs and Immigration building in Cardiff’s Bute Town and the crowd funding campaign achieved its £5,000 target in two weeks.